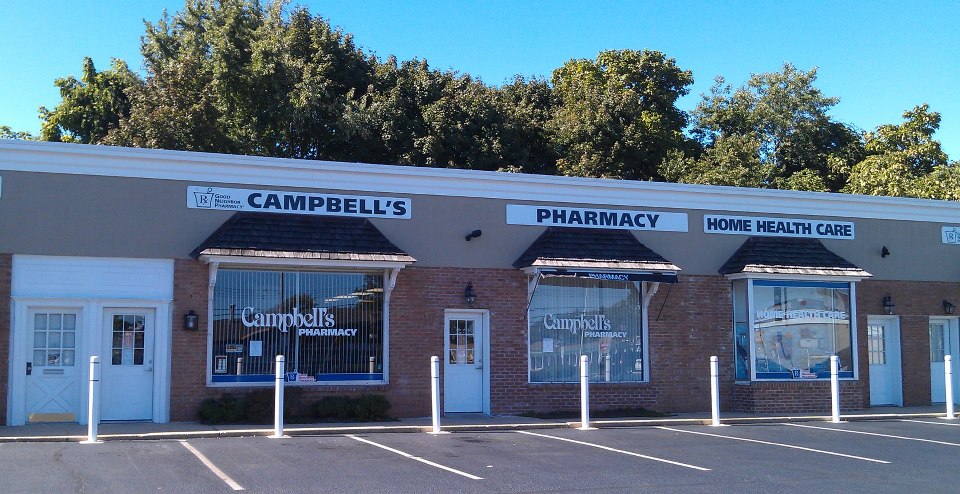 In 2010, the store was totally renovated to provide a full service retail pharmacy with large Home Health Care and Long Term Care departments dedicated to the unique needs of all of our customers. We currently employ between thirty five and forty people. We utilize state of the art equipment, including the Parata Max, our automated pill dispensing machine, and the Parata PACMED, which produces our onePac packaging system. These modern technologies have enabled us to quickly and accurately fill prescriptions, thereby providing excellent customer service. The investment in these industry leading technologies reflects our commitment to the highest standards of patient health and safety.

We are also happy to announce that in the Fall of 2011, Shore Vax, LLC will be offering vaccination services on the premises.

"Providing excellent patient care is the main priority here at Campbell's Pharmacy at Stop and Shop."

Founder and President of Campbell’s Pharmacy

Denis Campbell is the Founder and President of Campbell’s Pharmacy. He is a graduate of Rutgers University School of Pharmacy and has forty six years of experience as a registered pharmacist. Denis has been a retail pharmacy owner since 1973, when he purchased Main Pharmacy in Manasquan.

Denis has always believed in the importance of providing the very best customer service and care, establishing a team of dedicated employees, and creating a professional, safe and harmonious work environment.

Vicki Belko has been a member of the Campbell’s Pharmacy team since 2002. She graduated from Duquesne University in 1994, with a BS in Pharmacy. In addition to providing excellent service and counseling to our customers over the past decade, Vicki recently became a Certified Immunizer and a founding partner of Shore Vax, LLC. Shore Vax, LLC, is a company offering immunization services. Beginning in the Fall of 2011, Shore Vax, LLC will offer vaccination services at Campbell’s Pharmacy. Vicki values the opportunity to be part of a team where everyone strives to provide excellent customer care.

Andrew Barlow has been a member of the Campbell’s Pharmacy team since 2005. In 2001, Andrew earned a Doctor of Pharmacy from Philadelphia College of Pharmacy, which is now known as The University of the Sciences in Philadelphia. Andrew is dedicated to providing excellent customer service and especially enjoys the professional relationships that he has developed while working closely with the customers. Andrew is a certified immunizer, and is also a founding member of Shore Vax, LLC.

Frank has been a member of the Campbell’s Pharmacy team since 2002. He is a 1995 graduate of Wall High School and in 2001, he earned a Doctor of Pharmacy at Philadelphia College of Pharmacy, which is now known as The University of the Sciences in Philadelphia. Frank implemented and now manages the OnePac Packaging System at Campbell’s. Frank, along with his co-pharmacists at Campbell’s, became a Certified Immunizer and is a founding member of Shore Vax, LLC. Frank is also a member of the New Jersey Pharmacists Association and the Visiting Nurses Advisory Board. Frank values working in a professional pharmacy focused on patient safety with a great team of co-workers.

Glen has been a pharmacist at the Jersey Shore his entire career. Not only has he been a member of the Campbell’s Pharmacy team since 2007, but also worked with Denis Campbell at Main Pharmacy in Manasquan for ten years, from 1985-1994. Glen earned a BS in Pharmacy from Rutgers University College of Pharmacy in 1985. Along with his co-workers, Glen became a Certified Immunizer and a founding member of Shore Vax, LLC, a company that will begin offering immunization services at Campbell’s Pharmacy in the Fall of 2011. The uncompromised professionalism, commitment and focus on patient care at Campbell’s are the qualities that Glen values the most.

Donna is a 1982 graduate of the Massachusetts College of Pharmacy and Allied Health Services where she earned a BS in Pharmacy. She has been a member of the Campbell’s Pharmacy team since 2002. Donna is not only a pharmacist, but is also a Certified Immunizer, Certified Consultant Pharmacist and is certified in Medication Therapy Management. Donna values the professional yet family oriented atmosphere at Campbell’s, as well as the collaborative work environment between the pharmacists, the physicians’ offices and the individual customers and their families.

Leonard “Bernie” Marcus is a veteran pharmacist with more than fifty years of experience. He has been a member of the Campbell’s Pharmacy team since 2002. Bernie values his position at Campbell’s Pharmacy because it gives him the opportunity to work in a highly professional atmosphere where all of the employees are devoted to individual patient care and the all around wellness of the person with respect not only to their prescription medications but also their home health care needs.

Nick is a veteran pharmacist who has worked with Denis Campbell at Main Pharmacy and then at Campbell’s Pharmacy since 1979. Nick is a 1955 graduate of St. John’s University School of Pharmacy and is licensed in New York and New Jersey. Nick is a familiar face to many of the Campbell’s customers and is regarded as a professional and personal friend to so many of the people he has met and helped over the years.

It is health that is real wealth
and not pieces of gold and silver.